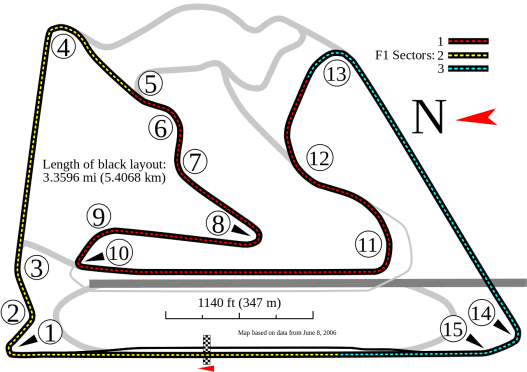 After a brief pause following the exciting opening round in Australia, Formula 1 returns for round 2 in hot and dusty Bahrain, for the first of the ‘transitional’ races, which start during the evening and finish up under floodlights.

In 2014 Lewis Hamilton won here after a race-long battle with Nico Rosberg, and Hamilton won here again last year, more comfortably. Kimi Raikkonen recorded his best finish of 2015 here with second place, whilst Bottas gave an assured performance to hold off Vettel and claim fourth. Whilst Australia teased at the notion Ferrari are closer to Mercedes, practice sessions have suggested that in fact, the Silver Arrows are still convincingly quicker, with the Ferraris actually having a relatively poor time of it.

A big surprise could be found in the form of Button and McLaren, who managed third in FP2. Was this a flash in the pan, or the start of something? For Alonso there was to be less joy – he will not take part in the race, as a result of injuries sustained in his dramatic crash in Melbourne.

Turn 1 here is a good overtaking spot, especially with DRS, and turn 4 is another good point to have a go. Turn 8 is a possibility, albeit it a tricky one, and turns 11 and 14 also offer up options. There are quite a few fast straights here, that should play into Mercedes’ hands, and therefore also help the other Mercedes-powered teams, but that being said, the middle sector is quite bendy, which might offer a little hope to the more aerodynamically focused teams, such as Red Bull. As with all races, strategy (especially given the changes to tyre options) will play a big part, and Ferrari will be hoping to get it right this time.

The UK has averaged 225 covid deaths per day since Boris Johnson warned us that many people would lose loved ones before their time, on 12 March 2020.

NZ has suffered 52 deaths since the pandemic started.

We have just had £30million cut from our NHS budget for Derbyshire. The Government is not increasing NHS spending here! Its all lies.
#nhsprivatisation #Derbyshire #mentalhealth