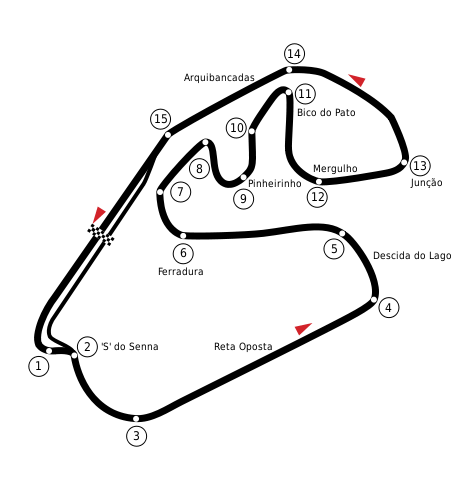 The penultimate round of season two of this little F1 project brings us back to Brazil, and Interlagos. This track has borne witness to late drama in F1 – the title was decided here in 2007, 2008 and 2012.

For me, in this fictional career, the title was already mine, so there was no pressure, other than a desire to have a better race here than I had last time. I was lucky that qualifying was held in dry conditions – I took pole once again (though only by a few tenths of a second from ButtontimeUnfortunately the race was a damp affair! I slipped down to fourth at the start, and struggled to keep pace with the leaders, falling to around four seconds back. On lap three, my front right tyre failed, and though I was able to keep ahead of everyone else as I limped back to the pits, I wound up some 18 seconds behind the 19th placed man.

So began my charge back up the field. I would gradually catch and pass one car after another, worming my way through the pack. I had to be brave on occasion – a few late braking moments into turn 1 (and also turns 4 and 13) paid off here and there, but a few moments of haste saw me slide wide here and there, costing me time.

Throughout the pit stops (and thereafter) I found myself catching and passing the pack, finding myself in fourth once more. I was aided by back markers holding up people here and there, allowing me to catch and pass Barichello (despite sliding wide at turn 4 on one occasion), so with 10 laps remaining I was around 10 seconds behind Vettel in second.

I managed to close to within 1.5 seconds of him with a few laps to go, then yet again ran wide at turn 4. With my tyres becoming worn, Vettel was starting to pull away again.

I then had a massive slice of luck. On the final stretch of the last lap, Vettel got caught in a train of back markers. I was able to swoop by them and Vettel, taking an unlikely 2nd place!

All in all, considering the wet track, the puncture and having to make a lot of moves stick as I pushed, I dare say this was my best race of this career. Interlagos is not one of my favourite tracks, I don’t like wet races and I had to fight my way back up the field. To finish 2nd in those circumstances is a great result!

He's not sorry, he's botched the bad idea of Brexit, and presided over one of the worst death rates from covid in Europe.

I really feel for @BorisJohnson. On a human level he's clearly very sorry as the events should never have taken place. But Boris achieved an 80-seat majority, got Brexit done, delivered a world-leading vaccine rollout, delivered a successful COP26 and led us through the pandemic.

A Matt Hancock being born. Barely a few minutes old, their first instinct is to head towards land and seek out dodgy PPE contracts.