At this point, I am presently somewhat stymied by a few ‘barriers’, and am currently seeking the means to overcome them in the only way I know – but I’ll explain that shortly. At the conclusion of the last chapter I’d found the Zora domain, and as I began the latest installment of my quest, I was granted another memory, and given Zora armour that would allow me to scale waterfalls. I discovered that the Divine Beast giving the Zora so much trouble is a giant mechanical elephant that’s threatening to flood Hyrule, but before I can gain access to it, I’m going to need shock arrows – 20 of them. 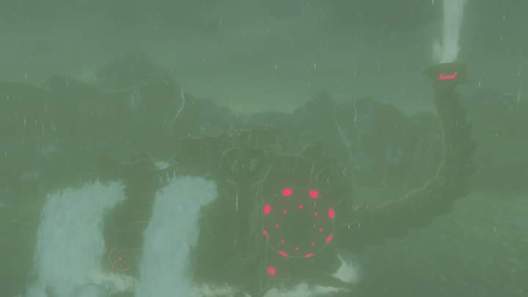 This is where the first barrier comes in. I had to take on a monstrous centaur-type creature (that bears a resemblance to Ganon’s final form in The Ocarina of Time), and this thing is not going to go down easy. I tried several times to fight it, but between shock arrows and fast attacks, I just couldn’t beat it. Annoyed at this, I set about tracking down Shrines, so I could increase my heart containers, and claim the Master Sword. I figured that ten hearts would be a good point to try again.

Among the more interesting Shrines, there was one which involved using magnetism to turn a door into a ramp, and I went back and finally conquered another Shrine that involved metal boxes. A pair of fascinating Shrines sat upon either one of the Duelling Peaks – to solve one, you had to know the pattern from the other.

I took a stroll to the south, crossing Hyrule Bridge and discovering a glowing dragon in the process. I tamed a horse and stabled it – going with the name Shadowfax (a cookie if you get the reference). I also ventured into a jungle, and found a large dragon’s head statue, behind which was a Goddess statue that requested I bring a scale to her, in exchange for a prize. 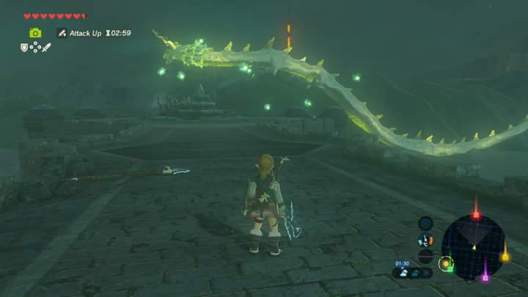 What else happened? I bought some armour. I gave 10 crickets to the guy who needed them to impress a lady, and I took care of some sheep rustlers. I dealt with enough Shrines to get ten hearts, return to the Master Sword and… failed. It seems the requirement to lay your hands on it is quite a tough one.

Several travellers had told me of hidden riches inside Hyrule Castle, and of a hidden entrance to the north, so one of my exploratory forays took me here. The place hums with evil power, and my progress was somewhat muted – there were a few bits and pieces of note but nothing especially exciting.

An intriguing discovery was of a thunderstorm and a series of orbs – it’s hard to explain, but I’ll go back to it – eventually – and explain it then.

More exploring, more Shrines – including a labyrinth in the desert, and a beautiful challenge involving orbs and giant statues of Knights. This had a Lord of the Rings feel to it – the statues were huge, imposing and each one had a symbol on it. Basically, you had to match the symbol on the ball to the symbol on the statue. I also followed the swords of the Gerudo to another Shrine. 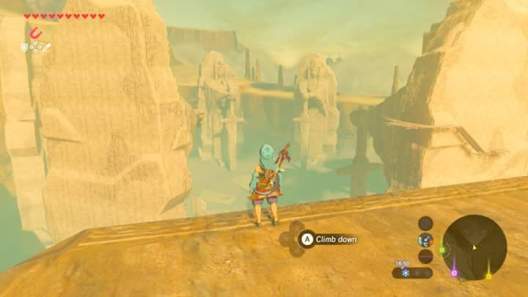 This is another reminder of the importance of exploration in this game. I happened upon the second labyrinth and the knights purely by looking for points of interest on the map.

Another discovery was of a seaside village, where I was able to buy enough shock arrows to go and confront Ruta – the elephant-shaped Divine Beast that’s been tormenting the Zora. Riding on the back of the Prince, I had to scale waterfalls to then take aim with shock arrows at four orbs on the things back, in order to disable it. From there, I would have to unravel the mystery of Ruta.

Are you naive, Mr @johnredwood, or dishonest? It is our gov that made a deal we have no intention of honouring. Brexit is a self-inflicted bullet to the foot.

Yesterday the Opposition parties once again sided with the EU and tried to damage the U.K. negotiating position. They all ignored the way the EU undermines the Good Friday Agreement and breaks the Protocol by diverting trade away from GB/NI.

What sort of music does that thing make? 🤔

How would you feel if your husband/wife/partner had sex with someone else in the family home whilst you were dealing with Cancer?

That's what Boris Johnson did.

I am shocked that more people are not repulsed by Johnson and this government. #JohnsonOut154

What's nice about my website is that I can switch off the trolls, very, very easily.