Previously, I’d been loitering around Hyrule Castle, which was crawling with Guardians, a decidedly risky place to hover around. I’d just been slain in a Shrine (a combat trial) and I wasn’t about to let that go. As I started playing out chapter 3, I ventured back into the Shrine.

The opponent was a miniature Guardian (well, miniature in comparison to the big ones running around outside). It not only possessed a laser cannon, but also wielded a spear. In previous trials I’d encountered similar creations armed with swords, but they didn’t have the variety of attacks of this guardian. This thing would combine melee attacks with more than one style of ranged assault, but the reward for besting it was a special Hyrulean spear – plus you could collect your vanquished foe’s weapon.

Shortly thereafter I found another Shrine, though this one was a little harder to actually get to, seeing as you had to firstly burn down a thicket of thorns then blow up a hole in a wall to find it. How did I know it was there? One of the upgrades to the Slate was a sensor that beeps at you when a Shrine is near – if you’re heading in its general direction the beeping grows louder and quicker. Move away and the opposite happens. Still, the fact that Shrines may be hidden and might require a few steps to reveal adds another layer of complexity and creativity to this game. This next Shrine was another combat trial, and upon completing it I had to take shelter from a brief thunderstorm, before heading off.

I crossed a nearby bridge with the intention of going north, whereupon I found myself facing a large encampment of Bokoblins on the other side. I made several attempts to fight them but I was overwhelmed by both their numbers and the arrival of more formidable varieties of these things. Eventually I decided to deny them battle and climbed around, finding another Shrine on the other side and dealing with a pair of orbs, a jumpy platform and a push button. 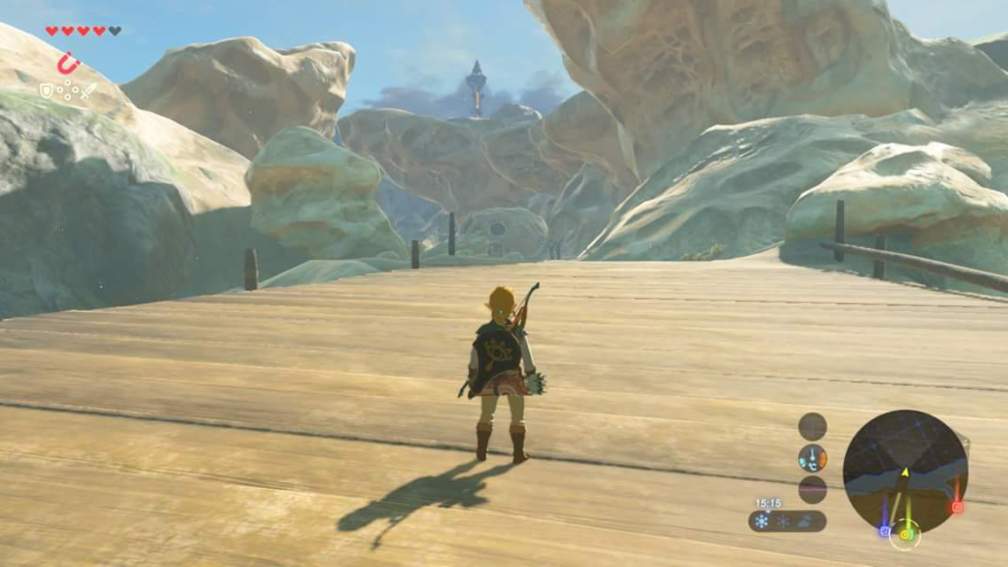 I continued along the path and came to a lake with a large selection of what looked like giant mushrooms growing out of it. To my right was another Tower, in the middle of another lake, with a trio of… well, I don’t know what they were, but they were dancing on the water and my instinct told me they were enemies. They carried what looked like electric weapons (urgh!), so until I can find or forge some means of dealing with that, a wide berth is needed – though I was in fact killed by a swimming creature that spat electricity at me. 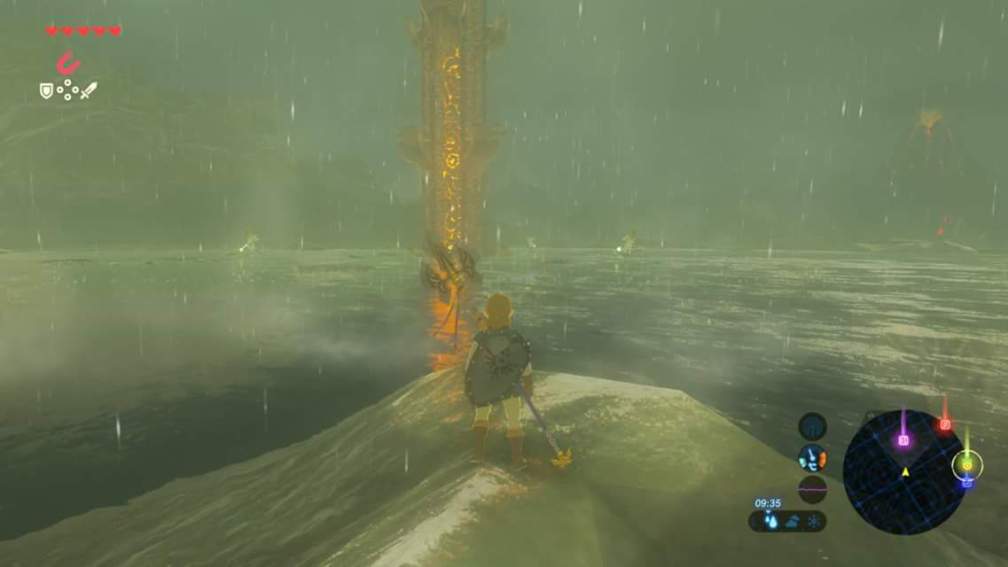 Abandoning my aim to climb this Tower, I moved instead to continue north, only to realise, once I checked the map, that I’d been heading west instead. D’oh! Taking advantage of the fast travel ability of the Slate, I journeyed back to Impa to see what she would have to say about my newly unlocked memory. She gave me a reward – the blue tunic seen in the trailers – and urged me to seek out the other locations in the Slate. The handy tunic reveals the number of hit points an enemy possesses, leading to more careful choices over fights. Well, that’s the theory. I didn’t put that idea into practice.

After speaking with Impa I took myself back to Hanteno village, to tackle a beach monster. I’d read of it on a bulletin board in the village and thought I’d check it out. To that end, I killed a big lizard, and got killed by a large encampment of Bokoblins (twice). I gave up on tackling them and instead entered into a spell of bouncing around. I tried to cross a rather expanse of water using the cyro skill, and failed when a swimming lizard interfered but not before I met a Rito (avian creature) playing an accordion. Incidentally, is the very similar look of the Ritos to Falco from Star Fox a clever link on Nintendo’s part? The Rito referred to ancient songs, and played one, something about 17 of 24 and treasure. My first guess is something to do with being at a specific place at 5pm game time, but I’m yet to find out. 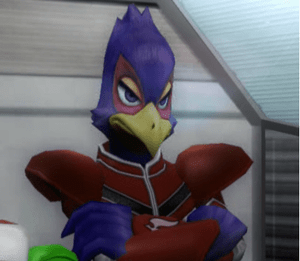 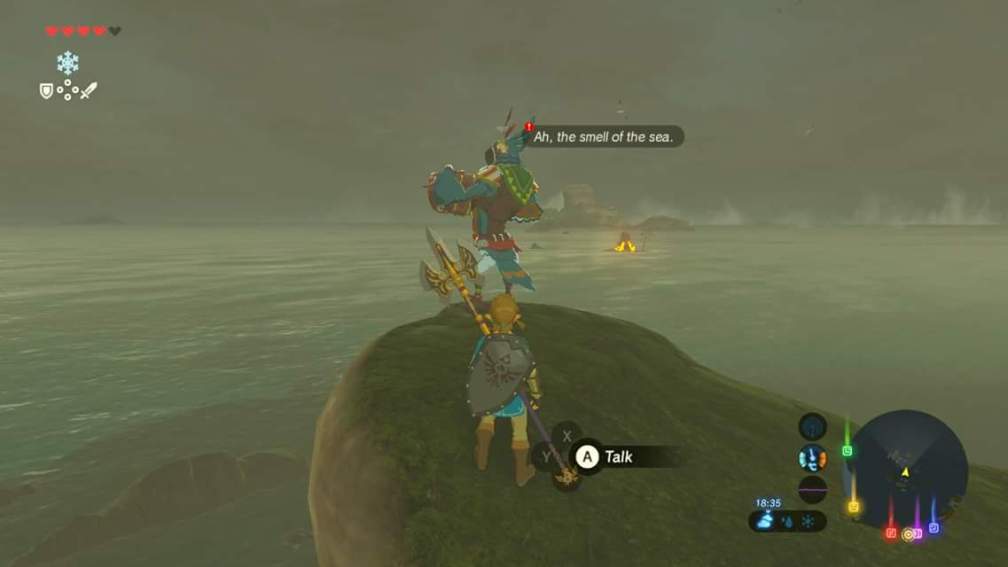 After this little jaunt, I scaled a nearby peak to get to a Shrine – and found myself face to face with the giant Bokoblin seen in the trailers. I didn’t fancy fighting it there and then, so crept past it. The Shrine was another combat one and this one has me beat – for now. The Guardian here was particularly fond of powerful beam attacks and I wasn’t able to deal with it – yet. After this I zipped off back to the Great Plateau and headed south – new territory, a bright, possibly desert region? I killed a couple of wolves (before they could kill me) and slaughtered a bunch of Bokoblins, before throwing myself at another Shrine. This is where chapter 3 ends – I’ve had a brief go at this Shrine but need another crack at it – time is the key point here. 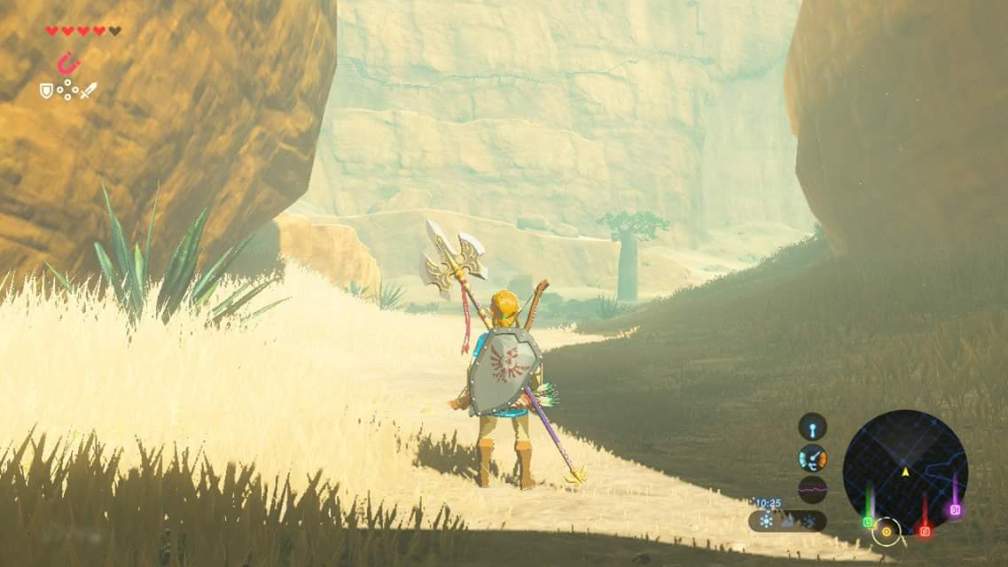 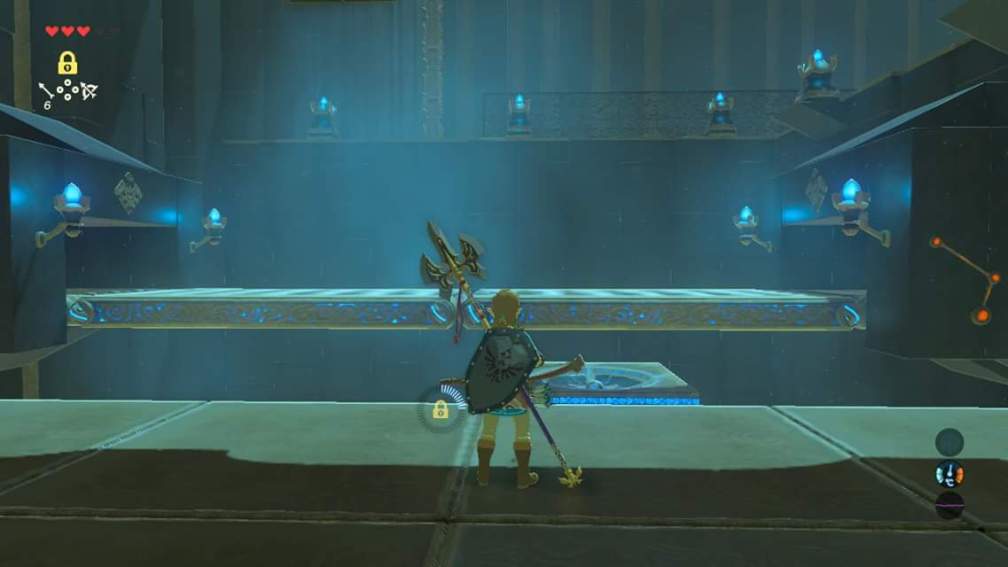